South Australia has always been a progressive State and was the first in Australia and the fourth place in the world where women gained the vote. In 1894 when all adult women were given the right to vote, there was no restriction by age or marital status unlike other countries where women had the vote. In fact, since 1861, women who owned property and paid council rates had the right to vote in local council elections. Women were also given the right to stand for Parliament in 1895, the first place in the world.

Building on this strong history, the South Australian Government is committed to enabling women to reach their potential as leaders in every field while recognising, honouring and celebrating the achievements of our women leaders.

The Office for Women works towards ensuring that more women are able to make a contribution as leaders and key decision makers in the South Australian community. One way to achieve this is to increase the number of women members of boards and committees.

General tips for board members

Training providers and board directories

BoardingCall (launched 2019) is the State Government’s primary online database for making appointments to its boards and committees. It is managed by the Department of the Premier and Cabinet.

BoardingCall enables people interested in being on a South Australian Government board or committee to: 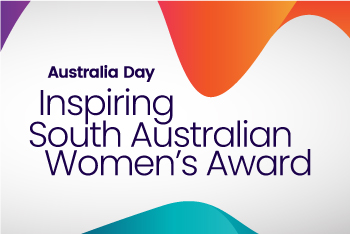 The Inspiring South Australian Women's Award (formerly known as the Women Hold Up Half the Sky Award) recognises an outstanding woman who has made a significant contribution to the community.  The award recognises the outstanding contribution women make, in a voluntary or paid role, in advancing and enriching our society. The award is designed to acknowledge those women who have previously not been publicly recognised for their work and service to the community.

The award categories are:

A Commendation Award may be bestowed to encourage the future potential of the nominee.

Liz is a highly regarded businesswoman and volunteer in her Wudinna community on the Eyre Peninsula, and received this award for her campaigning to pass Voluntary Assisted Dying legislation following her son's death after a long battle with bone cancer.

Farida Ayubi is the founder and joint owner of spectacularly successful Parwana restaurant in Torrensville specializing in Afghani cuisine that has hosted sold-out fundraising dinners in aid of those left behind in Afghanistan.

In the space of a few years Bianca has gone from working graveyard shifts in a northern suburbs potato factory to becoming a worldwide phenomenon in the music industry.

A proud and well-respected Ngaduri Elder, Pat has been a catalyst for the rights of Aboriginal women on a community, state and national level, ensuring their voices are heard, acknowledged and respected.

As Branch Secretary of the Australian Services Union, Katrine led a union campaign to ensure that workers in the community sector are paid appropriately.

A Special Commendation went to Stephanie O'Connor, an 18 year old woman acting as primary carer in her household since she was 13 years old.

A Narunga woman from Port Pirie, Lucy has worked in the area of Aboriginal health for over 10 years and has been instrumental in improving health outcomes for Aboriginal people.

Tam Boakes participates actively in the support and development of music in South Australia by providing performance opportunities for local bands and artists as well as investing in and giving back to the industry in many ways.

A Special Commendation went to Karyn Bradford for her ongoing commitment to the community of Milang and the hard work she puts into creating a vibrant, supportive community.

Tara is a Kurdish born PhD medical student and youth charities ambassador. Since migrating to South Australia from Kurdistan at age 3, Tara has been determined to give back to her community by using her education, knowledge and experience to help migrants and refugees build a better life in South Australia.

A Special Commendation went to Judith Wirtz for her 25 year voluntary commitment to the Warradale Branch of Meals on Wheels.

Sandra has made a career of advocating for the rights of women at work, as Director of the Working Women's Centre SA and as part of numerous committees, panels and advisory groups including being a founding member of, and adviser to, the Board and staff of the Working Women’s Centre in Timor-Leste.

A Special Commendation went to Councillor Lisa Lumsden of the Port Augusta City Council. Lisa has played a key role in advocating for children’s services and for greater community involvement in council decision-making.

Sarah is a passionate advocate and social entrepreneur who established Gogo Events as a social enterprise with the explicit aim of training homeless and disadvantaged people to produce décor items and event materials, then employ these trainees to install their events. Through Sarah’s work and the partnerships she has created, Sarah is changing lives and empowering people to build their confidence and capacity.

A special commendation went to Margaret Hempel for her outstanding contribution to the South Australian Country Women’s Association (SACWA) for over 60 years as a key member of the Loxton district, state wide and the Pacific region through the associated activities of the association and SACWA’s Women of the World activities.

This year’s Women Hold Up Half the Sky Award recipient is Emmah Evans, a woman who lives with Cystic Fibrosis but is a also a renowned public speaker and advocate for people with cystic fibrosis. Emmah is an inspirational role model who is committed to changing lives for the better and is proof that a disability should not define you.

A medical clinician researcher and National Health and Medical Research Practitioner Fellow with specialist training in child health, vaccinology, and public health, Professor Helen Marshall has dedicated her career to practicing and leading medical research at the forefront of the global fight to stop meningococcal disease.

A commendation went to Carmen Garcia for her work as a role model in the Australian Filipino community. She is the youngest and first Australian born Filipina elected as the National President of the Filipino Communities Council of Australia.

Arundhati has used the art of dance to raise awareness for several causes such as children and young adults suffering from down syndrome, dyslexia, cancer as well as thematic presentation towards supporting LGBTQ, raising funds for women who are victim of domestic violence and several others.

Dawn Jennings is a compassionate, devoted and selfless carer who has fostered children since the early 1990s. Dawn has provided a home 91 times within the fostering environment and has safeguarded these children until permanent homing solutions were discovered and secured.

Laura and Caylin are exemplary role models within their local community, recognised for their mentoring and leadership skills resulting in them both becoming Directors at the Christies Beach Surf Lifesaving Club. Laura and Caylin help to foster a culture of inclusivity and acceptance that is welcoming for all young people, by addressing the bullying, body shaming and social exclusion issues experienced by many young people in our community. Laura and Caylin also introduced the 'Surf Sisters' camp which promotes a safe environment for young women to build self-esteem and a sense of belonging in a male dominated environment.

Kaitlin Purcell (2021) received an Emerging Leader Commendation for her support for the introduction of women's football across many regional communities. Her passion and commitment to the sporting industry is demonstrated through her multiple volunteering roles and her ambassadorial role with Around the Campfire, a not-for-profit sporting organisation promoting reconciliation and diversity on the sporting field.

At the 2018 elections, a record percentage of women stood for and were elected to local government. 35.5% of elected candidates in local government are women across South Australia.

Aboriginal and Torres Strait Islander people — please be aware this website may contain names, images and voices of deceased persons.

The South Australian Women's Honour Roll is an important part of an ongoing strategy to increase formal recognition of women who contribute to the South Australian community. Held every two years, the Honour Roll acknowledges and celebrates the diversity of women in our community and their commitment to effecting change to ensure that we live in a safer and more inclusive society.

All women nominated are included on the ongoing list of nominees on the Office for Women website. Through a panel process, twenty women who have been selected for making an exceptional contribution are included in the 2021 South Australian Women’s Honour Roll publication. The outstanding nominees were honoured at a reception at Government House in November 2021.

Nominations were assessed by a panel of community members, who recommended which women should be inducted to the Honour Roll.

SA Australian of the Year

Outstanding women included in the SA Women's Honour Roll are nominated for the Australian of the Year Awards each year to provide national recognition for the contribution they make to the community.

Women's Roll of Honour for the 20th Century

The International Women's Day Committee (SA) Inc developed an Honour Roll for South Australian Women (PDF 5.0 MB) in 2001. This Roll lists outstanding women who made a positive impact on South Australian life from 1900 to 1999.

Other awards for women

Other awards for women

The Agrifutures Rural Women’s Award is Australia’s pre-eminent Award for rural women. The Award identifies and supports emerging women leaders who have the desire, commitment and leadership potential to make a greater contribution to primary industries and rural communities.

The Award supports women both financially and professionally. Each state and territory winner will receive a $10,000 financial bursary to implement their Award vision. Each winner also has the opportunity to participate in the Australian Institute of Company Directors Company Directors Course and will be supported to develop an individual integrated leadership plan.

Australian of the Year